Anyone want to swap a small percentage...email me at gened@gulfcoastpoker.net

WOW...Its really been a month

Damn...It did not seem that it had been that long since I posted a blog. I must be losing readers as usually I would get emails from people hazing me about not blogging. I apologize for not blogging to the ones that do read it...and for it being somewhat boring lately...but hey...I guess thats what being a first time parent will do to you.

I have been busy at work lately and starting to get some traction. I got "transferred" into another position recently...and I have been trying to adjust but it has been harder than I thought. I am making the best of it though...and I plan on working my tail off no matter what position I am in. With the economy the way it is under the incompetent President...Im just happy to have a good paying job that provides solid insurance for my family..."It is what it is"

We have been also working on the Magazine lately. Getting ready for the 2nd run, and trying to get all the logistics together.

So ...last time I left off I was talking about trying to make it to the Beau for the end of the WPT event they had in January. I was able to get out there to sweat Tyler and see everyone. Wild Bill, Brian H, John P and Kai L and I all hung out and had a blast. We initially met about the next magazine edition...and then just started bullshittin and havin a good time. They moved the 2nd to last day of the Main Event into the club in the back of the beau, so it had kind of a "Barroom" atmosphere as they played down the final table. We were kind of upstairs on the left side of the room...but the real party was going on across the room from us as the pros had their section carved out...and the drinks were flowing. Gavin Smith/Amanda Leatherman/Kid Poker/Jeff Madsen/Jason Mercier...and several other big name pros were all cuttin up somethin fierce.

Played 2-5nl with Kai for a couple of hours and booked a small win...while Kai cleaned up. The play was absolutely terriable and was a good game...until the 4 donks got cleaned out and left. One guy dropped over 2k in that game in less than 1/2 hour...it was crazy.

Bill and I were staying at the IP ...so we eventually made it over that way to play in the 1-2 game. I booked a win getting in for $250.00...and out with $565.00. I also had the pleasure of having Claudia "The Claw" Crawford on my left for several hours as I was in the 8 seat and she was in the 9. I think we both felt the game was somewhat soft...I saw bad play after bad play.

Lets see...what am I going to do today?...Probably grind away online and continue to get it in good...and get smoked. I thought about posting up some of the hands here but hey...most of you know what I am talking about as it happens to all of us online. I will be playing every single $11.00 Sunday Million Satellite today with the 100 seats guaranteed...they jump off every couple of hours. Tommorrows Sun Mill is the place to be ...as they are having the big "F40" 40 billionth hand celebration with...‘Sunday Million 4th Anniversary Special’ which boasts a $4 million guaranteed prize pool and a first prize of at least $1 million...I will play every satellite I can get my hands on to get in this thing...and then will prolly buy-in if I don't win a seat.

The saints win the Super Bowl...wow...that was incredible...Mardi Gras just passed also. I didnt do much there.

(Cheese factor going up here) ...I have to admit that my wife and I did get "Sucked Into" the Jersey Shore Phenom recently. We got caught up into it in the 2nd or 3rd episode. I just think that this was "Reality"...I dont think this show was "Scripted". My wife has put my sons hair into a "Fauxhawk"...and she raises his hand and says, "Beat the Beat buddy...Beat the Beat". (Cheese factor over) LOL

The few emails I did receive about my blog in the past few months have been about posting a pic of Ivey on my blog...here he is world...sans faux-hawk 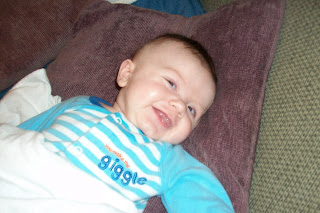 "That's why I can't say enough times, whatever love you can get and give, whatever happiness you can filch or provide, every temporary measure of grace, whatever works. And don't kid yourself. Because its by no means up to your own human ingenuity. A bigger part of your existence is luck, than you'd like to admit. Christ, you know the odds of your fathers one sperm from the billions, finding the single egg that made you. Don't think about it, you'll have a panic attack" Larry David as Boris in "Whatever Works"
Posted by GeneD at 2/20/2010 1 comment: