One of my pet peeves is players getting into tournaments and not understanding what they bought into...Here...I had not looked at the structure or probably would not have played. This segways me into a story from the Isle of Capri several months back when we are playing the shootout event...and midway thru the 3rd level there is a big uproar at one of the other tables as there were 2 gentleman that were pissed that the tournament was not a freeze-out. They were pissed at the staff/casino because they bought into a poker tournament and were not told what the structure/type of tournament it was...Can you believe that?...I was stunned. These people paid money to get into a tournament...and had no idea what it was...could a been Mexican sweat for all they knew...lol.

Congrats to Wild Bill for Cracking that Satellite and getting paid...nice job.

I got back on the coast yesterday to do some work, and was able to get into the 4pm $235 NLHE event. I felt I played really well and was able to take home 5th place...although I feel I played my bustout hand bad. I was very comfortable in my position at the table as well as the players...I just got over zealous and aggressive and got pinched.

I was sitting with UTG with with right at 7-8 bigs when i look down at A-Qo. Do I limp?...no. Do I min-raise?...no. I ship in the 7-8bigs and the big stack wakes up with Kings...I am told by most of my poker buddies that its a automatic play. I just felt I didn't have to ship in ALL my chips there...I could have limped/folded to the Kings if the guys shoves...etc.

A couple of things about this tournament:

-There was no chop...and it was never really discussed than a few people laughing about it. The Finnish player with the CL (Who won) made it clear he was there to win. I really didnt understand how that could change your thinking and mindframe ...until you think about it. Just the fact of not having that "little variable" bouncing around in my head made me play better. I was focused just on winning...probably could have have held out and got 4th...but if I double up there with my bustout hand...I would be dangerous.

-The way they run the "Hand for Hand" situation is a little different also. I think this is a PTC rule (Poker Tourney Consultants)...that there is no "Hand for Hand"...its "Round for Round".

So we are are on the bubble and we go "Round for Round"...the button is put in a "Certain" seat and the dealing begins. 13th/12th/11th all got knocked out in the "Round"...they all split the prize pool 12th and 11th...no matter when they get knocked out. So ...you get knocked out the 1st hand in the "Round for Round" and they pay 12 players...and they are 12 left...You are the "Bubble Boy" finishing 13th... You get to hang out for the rest of the "Round"...because if someone else gets knocked out...you'll split the 12th place money...very strange.

Got to see Monkey win his 1st ring also...good stuff...he was a happy camper...and we enjoyed a really cool dinner at Tien last week. Me...Senor Monk...a local Australian guy that reads the site/blogs that actually took a huge pot off of me in that Super Satellite (sorry buddy...I forgot your name)...and one "California". There was this Accountant there from Cali that visits the Coast on businesses several times a month...and she was "Steaming Hot"...we all had a great time...good food and good conversations. Monk loved his "Kung Fu Girl" Riesling...no seriously...check it out here KUNG FU GIRL 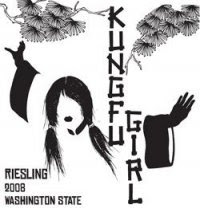