Final table at the Beau

Sorry for such a huge delay in my blogs, but I have been very busy lately. It took some needling by some players to get me to sit down and knock this thing out...LOL

This is going to be a quick blog as I have some things to do today. I haven't been playing much poker as I have been working alot at my job and working on starting construction on the remodel of our house at 111 Sherman. I do not think I could work in the construction industry as its always ...delays...delays...delays...with permits...etc. We have decided to look hard at raising/lifting the house as it would be the best situation in the long run. Below is what the house looked like pre-construction.
Its 2 storys with 2400 sg ft living and we can't wait to move in and sell this house I bought while single. Our house is closing in on us with the addition of Ivey, and we have to get this thing completed ASAP!! 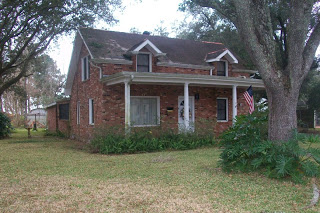 The final table was full of friends and people I have alot of experience with. I busted out to the eventual winner, Claudie "The Claw" Crawford of WSOP TV fame, and she would go on to win the whole thing. She played really well, and she deserved the win for sure. Also at the final table was Benton Blakeman who is a close friend and a great player. Benton and I have been playing the tournament poker scene since pre-moneymaker as we both grew up within 20min of each other in South Lousiana﻿. Benton went out 4th for close to $10,000. Jerry Ard was also at the table. Jerry became friends with Bill and I during last years circuit run and also played in the National Championship with us. Jerry plays well, but I had him short stacked and dead to spades right after the money bubble busted where he made a move from the button to steal blinds/antes with 4s-7s and I woke up in the big blind with QQ...somehow he gets there to double up...sigh. Also at the FT was Barron Whipple a local Houma Attorney who I have lots of history with. Barron and I have been at so many FTs together its not even funny. He also plays well, but I am very comfortable playing against Barron...he went out 6th for close to $7000. Dane Dubose from Lafayette played well, and I met him at this tourney. He had alot of same folks on the rail pulling for him as I did...Dane went out in 5th for $8400. I really enjoyed the tourney, and was stoked to have so many friends still in but I was still a little upset with my bustout hand...etc.

I was on the button with Claudia on my direct right ...right after Garland Thomas had just taken a huge beat ...and he was steaming/tilting. I was watching him closely and I saw after he initially looked at his cards with about 2-3 bigs left, he picked up his stack and I knew he was going to put it "all in" light. Everyone folded around to Claudia who was the Chip Leader at this point and she made a standard raise. Being the CL at this point I had Claudia's range to be "any 2 cards"...I would expect her to raise here with anything, and with 8-9 bigs left, I ship with A-5 off suit. Sure enough Garland sticks his chips in light (J-7o...I think)...and Claudia snap calls with 10-10. As soon as she snap called I groaned as I knew I was in trouble. She busted us both on the hand and I was not a happy camper.

Some might think that with A-5off from the button there is a "Must Shove" situation, but I was not uncomfortable with my stack, and I still had enough chips to hurt somebody. Like I said...I felt I just played too well both days to go out like that...but hey...its poker and it happens.

I hope to get to play some of the tournaments coming up around the coast and hope to see everyone there. I hope I can get my schedule right as I can only play on weekends with my job. My job is going great...I have the best boss you can have and my team/peers are also top notch. I think we have the best team in out region by far.
"When your enemy's making mistakes, don't interrupt him"  Brad Pitt as Billy Beane in "Moneyball"